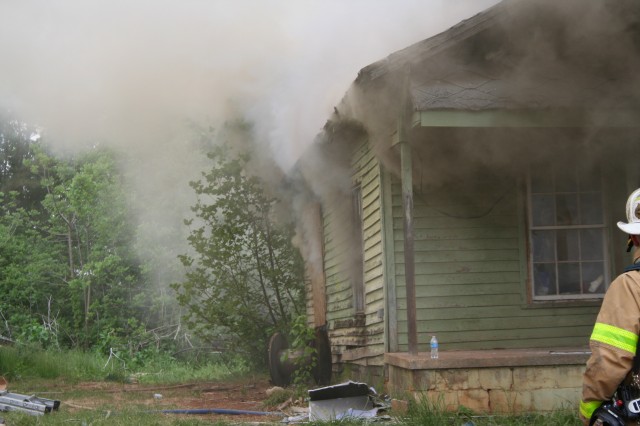 Would it be the heat? There is a noted presence of heat and it can be reduced. However,will you have the opportunity to remove enough of the heat, could you stop the burning process, so it's not heat. Consider the fuel, if the firefighters are able to remove the cluttered items from the burn area, would that extinguish the fire? If that process is ineffective then we know it is not fuel. That leaves air, it must be the air!

To understand the importance of air in the heavy content fires, consider structures that are loaded full of belongings from years of collecting and how they will provide endless amounts of fuel. In fact, many of these fires have enough fuel to burn for days. By considering fire tactics that eliminate heat and fuel and realizing how difficult they can be, it will allow the focus to fall directly on the available air. Air can have a huge influence on fire growth, but in hoarding conditions it most often is the variable that has the most influence. The amount of air available will determine if the fire will progress to decay or progress into the growth phase of a fire.

There are so many scenario's to consider in heavy content fire, but for the purpose of this article consider that there was a fire in a sealed basement or home that had fully functional windows and doors. In that situation, the amount of air could be minimal; depending on what doors might be open, the level of clutter, and the location of the fire. These variables could affect the how long a fire could burn without being discovered which would give the fire enough time to cause significant damage to floor and roof joists as well as floor decking. Add in the weight from the clutter and a pending collapse could be near, again all of this could happen before the fire is discovered.

Taking the time to study and understand theses variables will give firefighters a better knowledge of the added dangers posed by extreme clutter and prompt a more thorough size up. Being aware of these three variables when you arrive to a reported structural fire and seeing that the property has the external signs of hoarding (such as cluttered yards), officers need to investigate for signs of extended burn times. The best method would be to do a thermal imaging 360 size-up to discover the hottest parts of the structure while also indicating where the coldest area's are located, keeping in mind you are looking to see where the fire is presently and where it will go if you give it air.

Finding fires in the decay stage should raise suspicion of an extended burn time, while finding a fire well into the growth phase could indicate a ventilated fire. Both of these findings could indicate extended burn times. Just because the fire has progressed into the growth phase does not indicated shorter burn times. It indicates that the fire has found an air source.

If the fire is in this vent limited state firefighters should try to do everything possible to keep it that way. Leaving windows, doors, and stacks of clutter in place to limit the fresh air intake will allowing enough time for the appropriate staffing levels to arrive, limit fire spread, and keep the fire smaller. By limiting the air and fire growth it will make the conditions better for attack or rescue(If needed)

Without control of the air, loss of multiple windows or the inability to close doors, firefighters should set up for defensive operations that employ large caliber streams placed outside the collapse zone. Heavy Content conditions that are feed with large amounts of air will progress quickly. Often surpassing the GPM of standard sized handlines. If these variables are uncontrollable firefighters should assume the fire will continue to intensify even if handlines are in place.

Utilizing corners of the building to place apparatus, stream reach, and hose lengths will keep firefighters away from the dangers of collapse or overgrown trees. It will also give a area of refuge if the yard is full of clutter and the fire extends to that clutter. Fire extending to yard clutter can rapidly spread across the tops of the stacks as it will have all the air needs. Wind conditions can cause this horizontal spread to reach speeds faster than firefighters running in turnout gear. It is essential for firefighters to pay close attention if the fire extends into the yard and perform a quick retreat to prevent this potential disaster.

Controlling the air is essential when battling homes with unlimited amounts of fuel. Having control can allow for a rescue or interior push, while not having control is a indicator of defensive operation until enough water can be applied and/or air control can be established.