Hoarder Near Miss in Baltimore City 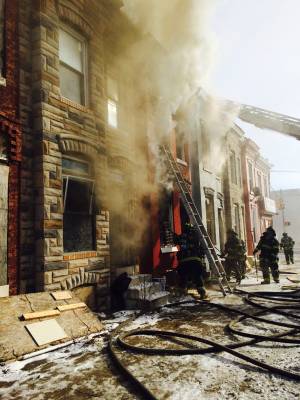 Companies were dispatched for the reported dwelling fire.  Engine 14 was first in with heavy smoke showing from the 1st and 2nd floor of a two story brick dwelling.  Battalion Chief 3 arrived shortly after Engine 14 confirming their report and established command making it a Working Fire.  As Engine 14 was making entry they were met with heavy fire on the 1st floor.  Engine 8 arrived in the rear with heavy fire from the 1st floor spreading to both the bravo and delta exposures.  Interior crews encountered a ton of debris making it hard to maneuver through the house.  A fireman from Engine 14 got trapped due to the debris but was quickly removed by his crew.

Due to the hoarding conditions and the reports from Engine 14 on the interior, Command requested an evacuation of the building.  Once 14 was able to make it out, crews worked together to knock the fire down from the exterior.  Crews in the exposure buildings breached the walls to the main fire building knock the fire down in the middle of the dwelling.

Command reported the fire was contained to the original fire building with no extension to the exposures approximately 30 minutes into the incident.

There were no reported injuries.